This workshop will focus on the do’s and don’ts for writing better technical papers and more successful grant proposals. Learn views and tips on how to avoid common mistakes that often result in a speedy rejection. Ethics and etiquette standards, matters that reviewers and editors are looking, fair reporting of prior art and (candid) plans for future work, appropriate (self-)citation of previous work,  plagiarism and other (inadvertent) violations will be discussed to help you minimize the probability of undergoing personal traumatic experiences!

Gisele Bennett Dr. Gisele Bennett is a Regents’ Researcher, the director of the Electro-Optical Systems Laboratory, and a Professor in the School of Electrical and Computer Engineering.  She founded the Logistics and Maintenance Applied Research Center (LandMARC), a multi-disciplinary center at the Georgia Institute of Technology.  She is a former member of the scientific cadré with Centre National de la Recherche Scientifique Laboratoire Optique (CNRS).  She has held numerous editorial positions with Applied Optics.  She holds Patents in RFID and Container Security.  She is a Fellow with OSA and SPIE, and a Senior Member of the Institute of Electrical and Electronic Engineers (IEEE).  She has numerous publications in books or book chapters, refereed journals, technical reports, and workshops. She has a PhD in Electrical Engineering and a certificate in Management of Technology from Georgia Tech.

Pavel Nikitin is RF engineer at Honeywell, Lynnwood, WA, where he is involved into research and development of RFID and wireless systems. He received the Ph.D. degree in electrical and computer engineering from Carnegie Mellon University, Pittsburgh, PA, in 2002. Prior to joining Intermec (now Honeywell), he worked at Ansoft, IBM, and the University of Washington. He has authored over 50 IEEE technical publications and has 20 issued patents.

Gregory D. Durgin joined the faculty of Georgia Tech’s School of Electrical and Computer Engineering in Fall 2003 where he serves as a professor. He received the BSEE (96), MSEE (98), and PhD (00) degrees from Virginia Polytechnic Institute and State University.  In 2001 he was awarded the Japanese Society for the Promotion of Science (JSPS) Post-doctoral Fellowship and spent one year as a visiting researcher with Morinaga Laboratory at Osaka University. He has received best paper awards for articles coauthored in the IEEE Transactions on Communications (1998 Stephen O. Rice prize) and IEEE Microwave Magazine (2014).  Prof. Durgin also authored Space-Time Wireless Channels, the first textbook in the field of space-time channel modeling.  Prof. Durgin founded the Propagation Group at Georgia Tech, a research group that studies radiolocation, channel sounding, backscatter radio, RFID, and applied electromagnetics.  He is a winner of the NSF CAREER award as well as numerous teaching awards, including the Class of 1940 Howard Ector Outstanding Classroom Teacher Award at Georgia Tech (2007).  He serves as an editor for IEEE RFID Virtual Journal, as an area editor for IEEE Transactions on Wireless Communications, as secretary of the IEEE Wave Propagation Standards Committee, and as vice chair of educational outreach and distinguished lecturer for the IEEE Technical Committee on RFID.  He is a frequent consultant to industry, having advised many multinational corporations on wireless technology.

Bill Colacchio, Associate Director Editorial Services, IEEE, has nearly 30 years of experience in all aspects of science, technical, and medical (STM) publishing from article submission to final delivery (for online and in print) including in-depth knowledge of peer-review, editorial, production, distribution, and the financial management of journals. He is involved in streamlining electronic editorial processes by actively participating on design teams for building all-digital workflows and for creating new electronic products and tools. He also works on improving editorial tools and workflows through the application of Agile Scrum Methodology as a Certified Scrum Product Owner. He also manages offshore editorial and production vendors, and responsible for managing the total production performance metrics. He interacts regularly with authors, editors-in-chief, and volunteers worldwide as well as with business stakeholders and is involved in planning future projects and goals. He also acts as the liaison for questions regarding IEEE publication policies and its overall publishing operations.”

Apostolos Georgiadis was born in Thessaloniki, Greece. He received the Ph.D. degree in electrical engineering from the University of Massachusetts at Amherst, in 2002. In 2007, he joined Centre Tecnologic de Telecomunicacions de Catalunya (CTTC), Barcelona, Spain, as a Senior Researcher, where he is involved in energy harvesting, wireless power transfer, RFID  technology and active antennas and antenna arrays. Since Apr. 2013 he is Coordinating the Microwave Systems and Nanotechnology Department at CTTC. He serves as an Associate Editor of the IEEE Microwave Wireless Components Letters, and IEEE RFID Virtual Journal. He is past Chair of the IEEE MTT-S Technical Committee MTT-24 on RFID Technologies and member of IEEE MTT-26 on wireless energy transfer and conversion. He received the 2014 IEEE RFID-TA Best Paper Award and the 2015 Premium Award for Best Paper in the IET Microwaves, Antennas and Propagation journal. He is Vice-Chair of URSI Commission D Electronics and Photonics. He has contributed to over 150 publications: books, book chapters, technical journals and conferences.

Shahriar Mirabbasi is a Professor in the Department of Electrical and Computer Engineering at the University of British Columbia. His research interests include analog, mixed-signal, and RF integrated circuit and system design for wireless and wireline data communication, sensor interface, RFID, and biomedical applications. He has co-authored over 150 technical journal and conference papers. 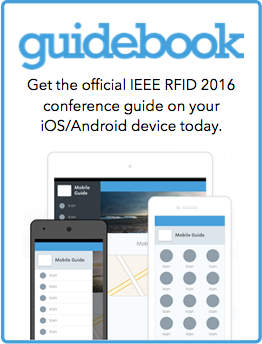